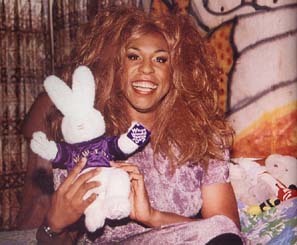 A pioneer in the homo-core movement, Vaginal Davis is a performer, artist, writer, and musician whose work pushes the limits of what it means to be black, queer, and punk. Starting in the late 1970s, Vag began to create music, performances, and zines which responded to the racist and sexist boundaries of the queer and punk communities of the time. Always outspoken and political, Davis’ confrontational and unshrinking performance style has been labeled “terrorist drag” by queer studies scholar José Esteban Muñoz. Currently, Davis lives in Berlin – but her pussy is still in Los Angeles.

Press: Let Her Teach You: Questions for Vaginal Davis by Interview Magazine