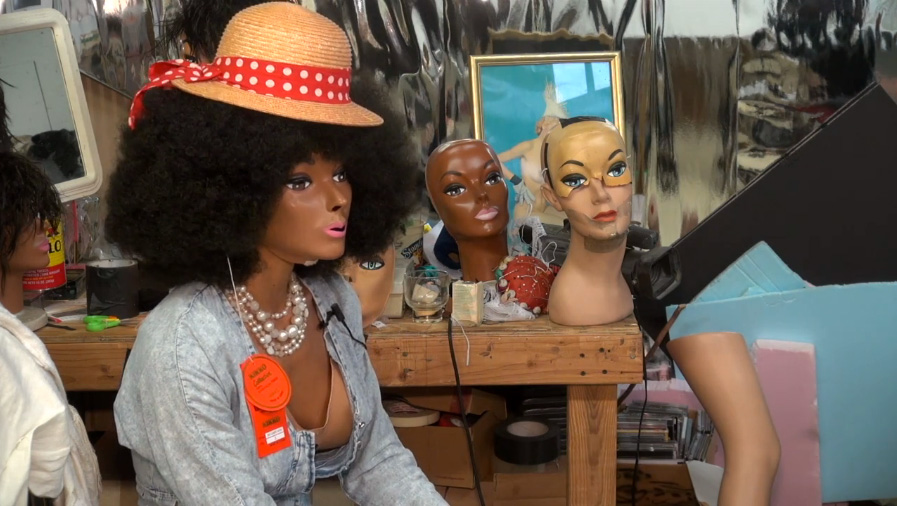 What’s tight, right, and in your line of sight? It’s Episode TWO of Trans-Q Television!

In our second installment, the masked dancer herself – NARCISSISTER – hosts a motley crowd of guests including SSION, House of Ladosha, Erica Gressman, and Mikey McParlane. From artist interviews to hip hop beauty, Episode Two has what you need.

We start with a profile of Brooklyn-based, “performance artist and modern vaudeville performer,” Narcissister. Narcissister began dancing while she was a student at Brown University. Now a performer at some of New York City’s hottest hotspots, this enigmatic woman took a few minutes out of her busy schedule to talk with Trans-Q Television and give us the low-down on the Narcissister Project. Who knows – you might be Narcissister too.

Next up are Mikey McParlane and Erica Gressman. Mikey and Erica are both received their MFAs from the School of the Art Institute of Chicago, where they became friends and collaborators. Thanks to the magic of video, we get to see a glimpse of their performances for the 2012 VIA Music & New Media Festival here in Pittsburgh. Mikey treats us to a sonorous, sparkly death chant and Erica demonstrates her self-surgery prowess. Pass the parmesan, please.

For music lovers, Episode Two is a dream. SSION, queer pop music celebs, stop by for an interview with Darla de la’Piranha and treat viewers to a short performance. You’ll also see some of SSION’s performance at 6119, hosted in collaboration with VIA. During the interview, SSION is joined by House of Ladosha’s own Cunty Crawford Ladosha.

Speaking of House of Ladosha… don’t miss their live performance of “B.M.F (Black Model Famous).” It rounds out Episode Two and – sadly – brings us to the end credits.

Interspersed between these awesome guests are segments like, “Word of the Day,” a self-love bathtub scene (complete with Narcissister masks), and a sensual packing session by Deck Buffet.