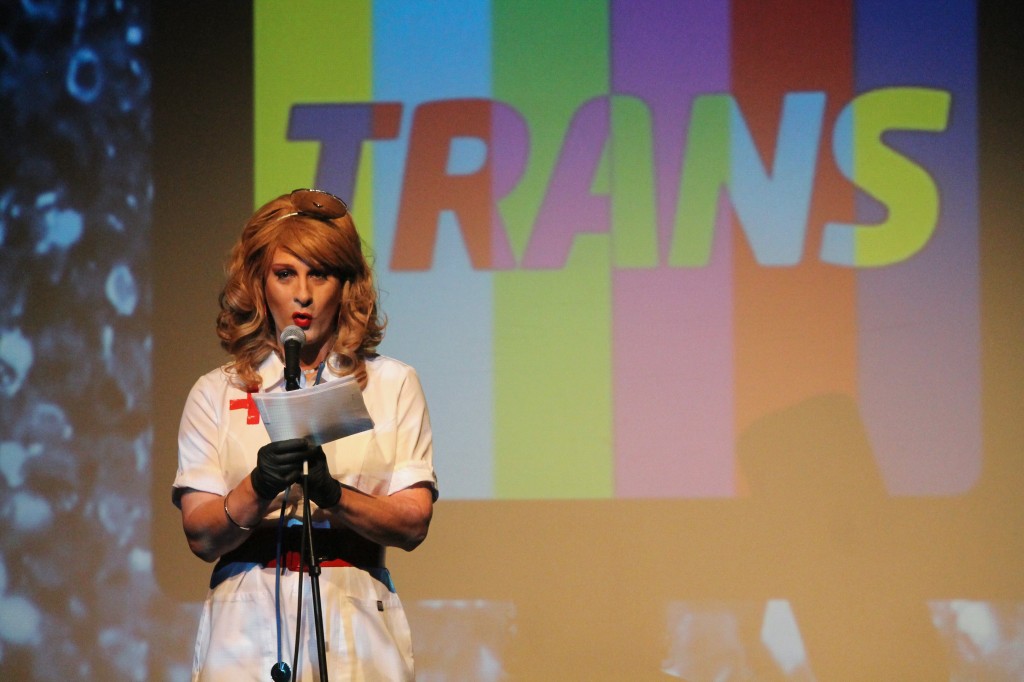 Last Saturday (September 7, 2013), Trans-Q Television hosted its second live event, the aptly named – Trans-Q Live!, at the Andy Warhol Museum. Giving the Pittsburgh public a taste of Trans-Q’s raucous style, the sold-out show was a success. From imagined presidential apologies to vaudevillian surgery, Trans-Q Live! was the performance, photo, and video buffet of your dreams. Though it’s hard to describe some of the video shorts shown during the evening (featuring Christeen, Vaginal Davis, Psychic TV 3, Miss Daddie, and the likes), here’s a brief recap of the performances –

After the audience settled into their seats, the stage lights shifted and began to illuminate a massive fabric and flower seedpod structure. And who would happen to pop out but Stephanie Ross – complete with baa-baa-double-headed black sheep costume. Scott Andrew soon followed, appearing as Ross’ lonely afterbirth. The two danced and wrestled through the duration of their performance – Pleasure Strike! – until they finally returned to the space/seedpod.

Soon after the postpartum prance, Janet Granite entered the stage and began her hostly duties. Being the current reigning Miss Blue Moon, Janet’s schedule is packed tight. So, we were elated when she accepted our invitation to host TQL. Don’t mistake Janet for just another drag queen, though. Crafty and wise, Janet constructs most of her outfits and props. Sometimes that means wiring circuit boards, modifying motors, … building a tennis racket which bursts into flames during an unparalleled fit of air guitar. Serious stuff.

Next to the stage were Joseph Hall (from the Kelly Strayhorn theatre) and Jasmine Hearn (local dancer/choreographer) with 1st Annual National Spelling Ball. Mixing ballroom style with spelling prowess, they taught us how to spell words like “shade” and “banjy” in English and body language. (Does that make us bilingual now?)

With the stage lights dimming, Caldwell Linker’s photo slide show began. Working in tandem with their exhibition at the Warhol, “All Through the Night”, Caldwell’s photos were accompanied with music by Nomi Lamm. Giving us all a moment to reflect on who we are, and how we live our lives in this city, the photographs offered a glimpse into, “extravagant performances of local drag queens, house parties and simple afternoons on the porch.”

Diverging from the real, heartfelt tone of Caldwell’s work, Dani Lamorte offered a five-minute excursion into the absurd world of a club-hopping fungus named “Rocki” – short for “Rocki Forti”. Mixing spoken word with a curious rendition of “Les Poissons” from Disney’s “The Little Mermaid”, Cruisin’ for a Fungi narrated the tale of “Faggot” (pronounced Fag-oh), a young breadcrumb in search of a moldy lover.

Before the spores had spread too far, the beautiful Janet intervened and sent the audience on an short intermission. Upon returning to the theatre, the crowd was treated to a Grade-A, 100% Certified, Fancy performance by Janet and guest star Bambi – Operation. With an operating room backdrop, sexy surgeon, and musical medley sure to cure what ails you, the duo started their funnybone-tickling skit. Janet performed routine procedures on the willing patient, curing diseases like CWBS – Chronic Wishbone Syndrome. In true Granite style, Bambi was equipped with a red lightbulb nose connected to a (very) loud alarm bell. Whenever the surgery went awry, the light went bright and the bell went… well, you know what bells do. Eventually, bad humors overtook the good doctor, though, and Janet ripped out poor Bambi’s pre-broken heart. Oops, she did it again!

Though a fully-qualified physician, Janet wasn’t able to help our next performer. Suffering from a condition known as “academia”, Harrison Apple lectured the audience on the importance of witchcraft, liquor codes, and defeating Belthazar in Saw You at the Social Club, HMU. The names of people, places, things, and ideas were changed, so that rights of informed consent could be protected. Decked out in what we hope was a costume, the Carnegie Mellon research fellow gave everyone a crash course in the history of witches (read: gay men in organized crime in the first half of the 20th century), witchcraft (read: organized criminal activity by gay men), and the state (read: the state) in Pittsburgh. We’re still not sure what will be on the exam, and we’re left with a lingering question: Do witches really ride on broomsticks?

Bringing us back to center, local artists Ayanah Moor and Ginger Brooks Takahashi followed with a thoughtful and playful performance. Stealing shoes from audience members, the duo tapped the footwear on various pieces of furniture which were scattered across the stage. Connected to one small table were a microphone and a sound looper. The beat of the street-worn shoes then played out their rhythmic melody through an amplifier. All the while, Moor and Brooks Takahashi organized the shoes against the back wall of the stage. Half noise, half dance, all wonderful.

To close out the evening, Silky Shoemaker performed Many Apologies with Elia Singer. Elia dressed as Nancy Reagan ,while Silky was kitted out as Ronny Reagan himself. Imagining the apologies she always wanted to hear from the late president, Shoemaker read a stunning monologue. Taking culpability for the destruction of workers’ rights, the decline of the middle class, and the ravages of AIDS, the performed Reagan left us all speechless, as we wondered about the why’s and how’s of a man so callous and selfish.

Appearing one last time, Janet took a moment to thank the performers, Warhol staff, and production crew for all of their hard work. A gracious end to a glorious evening.

Though each performer contributed their best to make Trans-Q Live! a roaring success, none of it would have been possible without our awesome crew and supporters. Katie O’Connor and Alex Walker, our handy stage hands, made sure everything was just-so both on and off stage. Alex also pulled double-duty and took photos of each act. Meanwhile, Christin Bongiorni, Jennifer Huang, and Reese Adams-Romagnoli captured every captivating second on video. Lukos Carmona and Matt Robison managed the tech aspect of the show, handling projections and music. And, of course, no event at the Warhol would be complete without the kind and brilliant sound engineer Keith Olash, who made sure each performance rang out crystal clear.

The entire Trans-Q Live! team would like to thank our the show’s producer, and Trans-Q TV’s executive producer, Suzie Silver, for all of her devoted work. Suzie worked hard over the summer, collaborating with the Warhol, to bring Trans-Q Live! to life, full of exciting performances and videos. We would also like to thank the Andy Warhol Museum for inviting Trans-Q Television, with special thanks to Ben Harrison and Eric Shiner. Last, but certainly not least, our thanks to the Carnegie Mellon University School of Art and the Center for the Arts in Society for supporting Trans-Q Television in all its endeavors.

See you next time! 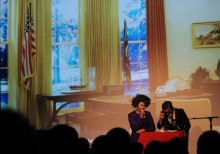 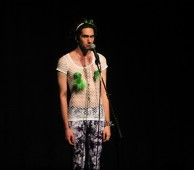 Dani Lamorte in “Cruisin’ for a Fungi” 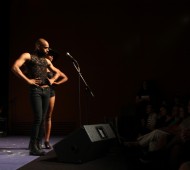