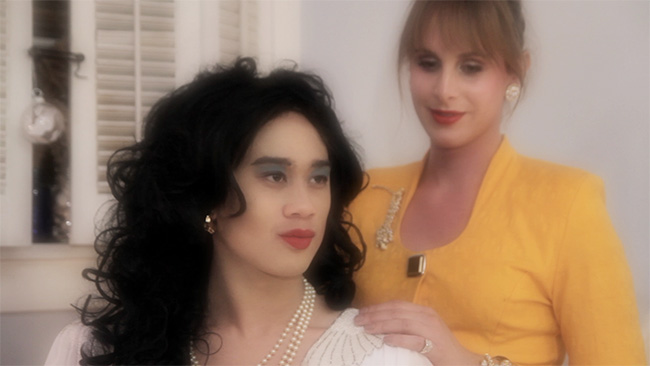 Debuting in episode one, Mercury in Retrograde is Trans-Q Television’s very own in-house soap. Following the dramatic developments of a stubbly heiress and her smooth suitors, the first installment left us with quite a cliffhanger – Devon dying on the floor, accusing Ladsworth of being unfaithful to Carlotta.

Will Devon recover? Will Carlotta confront Ladsworth? Will that unfortunate lady in the big wig apply powder to her shiny nose? (Grl, you’re givin’ us lens glare.) While I cannot answer any of those questions, here are a few outcomes I have imagined.

1) Ashamed of his betrayal of Carlotta, Ladsworth apologizes to the pearl-encrusted beauty and breaks it off with the mysterious pool boy. Won over by Ladsworth’s pleas, Carlotta pledges her everlasting love and lipstick to the mustached marvel. The following day, during her morning toilette, Carlotta begins to use her electric razor, unaware it has been short circuited. A powerful current racks her body, leaving her with two side effects – a permanent perm… and death! In a “whodunit” twist, we’re left wondering…

Was it all just a ploy to clear Ladsworth’s name and then dispose of the new debutante? Or was it… the ghost of Devon!!!

2) Carlotta’s mother, whose name nobody can remember, grins an evil grin as Devon’s body convulses on the floor. Her plan worked! Ladsworth, who she convinced to poison the young servant, will take the fall and that hairbrush-impaired helper (Devon) will never lay a finger on her daughter. Her joy, like her dead husband, proves premature when Ladsworth confesses the whole charade to Carlotta in a moment of weakness. With no other option, Carlotta’s mother plots to escape her glittering world of staircases and iPhone flashes. Packing a suitcase and giving her trademark yellow two-piece to that girl with the unfortunate nose, she runs away to Los Angeles and becomes… Zackary Drucker!!!

3) After weeks of mourning her deceased friend, Carlotta receives a call from a mysterious phone number – but she doesn’t answer because she thinks it’s Sallie Mae. When she listens to the voicemail, she is disturbed to hear Devon’s voice. As it would turn out, Devon didn’t die at all. His twin brother, Hevon, was filling in for him while Devon skipped out on the evening’s duties. Hevon had been heavily involved with the mob and now, seeking to recoup their losses, the mob had kidnapped Devon, mistaking him for Hevon! Another phone call comes in as Carlotta listens to Devon’s message. Afraid of missing him again, she answers. A dark, menacing voice comes over the line:

“Hello, this is Andrew from Sallie Mae. May I speak to Carlotta, please?”

It’s worse than she could have ever feared.

Got an idea for how Mercury in Retrograde might end? Send it our way! Trans.q.television@gmail.com, or Tweet it to us: @transq_tv.